Winkdings is a simple POV gadget you can use to "draw into the air". (POV = Persistance of Vision)

The project was done for electronics workshops, mainly for introduction into soldering and the basics of electronics, but it also can be used to get started with microcontroller programming.

The device can be programmed to display many different things. For our workshops we usually pre-program it with a heart: 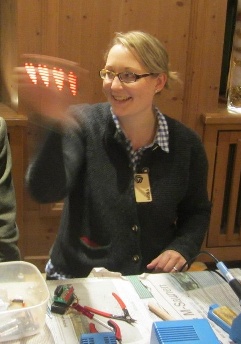 There is already quite a good implementation of this idea - the MiniPOV3 - and it also was used for workshops at the FabLab München with success already.
But there is room for improvement:

We source the PCBs and the other parts ourselves, so the kit is cheaper too. 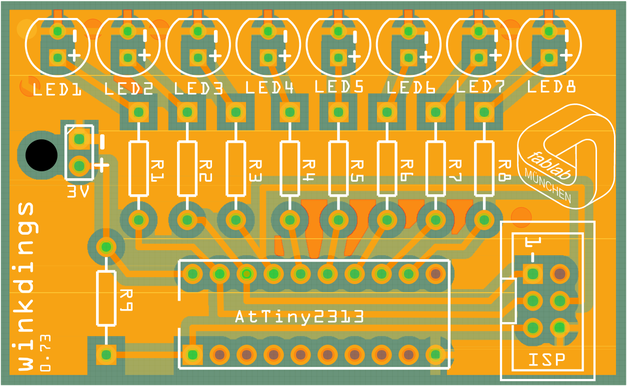 Winkdings is software compatible to MiniPOV3. MiniPOV3 firmwares run on the Winkdings without changes. The programming skeleton to create your own images can be used as well.

For programming you need an AVR programmer, which you connect at the ISP connector on the Winkdings.
On a brand new Attiny2313 you also need to "burn the fuses" correctly (8MHz, internal oscillator, clock division off). The parameter for avrdude is  -U lfuse:w:0xe4:m. With the MiniPOV3 package you use make burn-fuse.

Note: The Vcc pin of the ISP connector is not connected. This was done to prevent LEDs to get a too high voltage when the Winkdings is programmed with a progammer using 5V. Therefore the Winkdings needs to be switched on, so it gets power.
Unfortunately this causes problems with some programmers, e.g. the AVRISP mkII, which probes the Vcc pin and rejects programming if there is no voltage. As a workaround you can temporarily connect 3V+ with the Vcc pin.